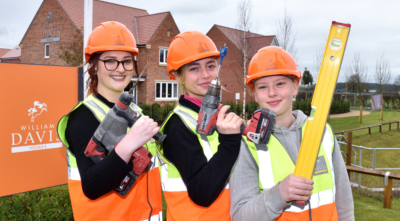 Three female apprentices at leading housebuilder William Davis Homes are showing the way in how to build a successful career in construction.

The teenage trio are proud to be ambassadors for women working in the construction industry, and on International Women’s Day (Tuesday 8 March) are encouraging others to join them.

Fourth-year apprentice electricians Demi Whitehead and Felicity Monks are both aged 19, while 16-year-old Sian Bradshaw is in her first year as an apprentice bricklayer with William Davis Homes. Last November, Demi became the Loughborough-based company’s first female Apprentice of the Year.

“These days, it really doesn’t matter whether you’re a man or woman - we’re just as capable of carrying out any construction job,” says Demi, who joined the company straight from school. “Everyone’s really friendly on-site and it’s a great experience.”

A study* last year indicated that just over one in ten (13%) of people employed in the UK construction industry are women. A mere 3% of ‘blue collar’ construction workers are female. The theme of this year’s International Women’s Day is #breakthebias.

Sian says although the figures show women are in the minority in the UK building industry generally, construction sites are no longer seen as male-dominated, masculine places. “I’m not treated any differently,” she added. “Everyone is really welcome and we get on with the job.”

Felicity was encouraged be an electrician by her grandmother: “My grandma told me I should get a trade because you can’t go wrong with that. So that’s what I did. She’s really proud of me and loves telling her friends about what I do.”

As well as the determination to succeed, these three young apprentices say women can also bring another quality to the workplace – as good listeners.

“That’s so important when it comes to conversations around mental health,” says Felicity.

The HR Manager at William Davis Homes, Rebecca Jones, said all three apprentices are great ambassadors for encouraging women to consider construction careers: “They are wonderful advocates for women in construction. All three have a strong passion and enthusiasm for their trade. I hope that as an industry we start to see more women follow in their footsteps.”

Felicity is attending a career event at Stephenson College in Coalville this week, in support of efforts by William Davis Homes to encourage more young women into construction jobs.

The company is recruiting for its 2022 apprentice intake. Anyone interested in becoming an apprentice at William Davis Homes should ring 01509 231 181 or email abbie.beeres@williamdavis.co.uk.