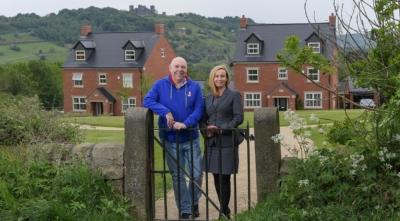 A LONDON-BASED RECORD LABEL EXECUTIVE SAYS HE HAS ACHIEVED HIS DREAM WITH HIS NEW HOME IN MATLOCK.

Jamii Layton had spent years living in Surrey and commuting into the capital for work but longed to swap city life for country living, in a home that would also be suitable for a dog.

After finding it impossible to find a suitable property in the south of England, Jamii and husband Martyn Hoyle took their search further north and fell in love with the Treetops development in Matlock as soon as they arrived.

Jamii, who works for major record labels on a freelance basis, said: “When I was younger, living in London was great but we wanted somewhere quieter and more rural and we could tell that Treetops was everything we wanted as soon as we drove up.

“On a purely practical level, geographically life is cheaper up here which allowed us to purchase a bigger property than we could ever have afforded in Surrey, which is incredibly expensive.

“We also love the location here: we’re in the countryside, but it’s still walkable into town and you can also hop into the car and be in Chesterfield, Sheffield, Derby or Nottingham in no time at all.

“Due to the central location, Manchester, Liverpool and London are all within easy reach too, so strategically, I would encourage anyone to look at this area – we really feel it has the best of both worlds.”

Jamii and Martyn moved into their four-bedroomed Hathersage house, with unobstructed views of Riber Castle, just days before Christmas last year and say that the support from staff at William Davis Homes was invaluable.

They are particularly happy with their large kitchen/diner which runs right across the rear of the property, with French doors to the garden, which has allowed them to fulfil their dream of welcoming a dog.

Jamii added: “We’d never bought a new build property before and we didn’t know how to go about the process, but Steph in the sales office made us feel as if we were in a safe pair of hands and nothing was too much trouble for her.

“In fact, we can’t say enough good things about all the William Davis Homes staff – from Simon the site manager to every plumber, electrician and builder we’ve ever had dealings with.

“I know some people worry that once they have bought a property you never see the developers again, but the aftercare we have received has been extremely impressive.

“I would genuinely encourage anyone to consider Treetops or William Davis Homes – they have gone over and above what we expected in almost every way.”

Treetops is open daily and a range of purchasing options are available including Help to Buy and Part Exchange.