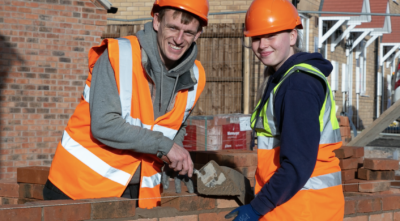 To mark National Apprenticeship Week 2022, we’re celebrating some of our amazing apprentices by sharing their stories. Meet the bricklaying siblings who embarked on the same journey, 10 years apart.

Oliver Bradshaw, 26, originally joined us through our award-winning apprenticeship scheme back in 2011. He is now one of the 80 employees who started as an apprentice but stayed on once their training was complete. Ten years later, his youngest sister Sian, 16, followed in his footsteps, joining the apprenticeship scheme in September 2021.

Oliver, says: “My older brother and dad are both in the building trade and so I followed them. The William Davis Homes apprenticeship was seen as the best in the business and I really wanted to get onto it. I’ve now been working with the company 10 years and the skills I have learnt and experience I have gained are now also helping me renovate my first house.”

Sian is currently based at our Lace Fields development in Ruddington, working alongside two other first-year apprentice bricklayers under an apprentice mentor. For her first year she is mainly site-based with eight-weeks spent at Leicester College. But she hopes to join her brother’s crew in her second year of the three-year apprenticeship.

She says: “I have been helping my dad and our older brother, who has his own building company, since I was little so I knew I wanted to work in the trade. Earning while learning really works for me and I’m saving money to buy my first car for when I can start driving lessons.”

Both agree that the approach to learning through an apprenticeship is a real plus for them, with Oliver adding: “Neither of us liked being in the classroom at school and so the opportunity to start a career with a focus on practical, hands-on learning works for both of us.”

We currently have 38 apprentices in a range of key trades including bricklaying, joinery, plumbing, electrical installation and plant mechanics. There are also four technical trainees – three trainee quantity surveyors and one management trainee – based at our head office in Loughborough.

Recruitment has already begun for the 2022 intake, and we expect to take on at least eight more apprentices including bricklayers, site joiners, electricians and plumbing and gas engineers.

Gary Long, Apprenticeship Manager says: “National Apprenticeship Week is an important date in our calendar as it gives us the chance to recognise and promote the success of our in-house apprenticeship programme. Our apprenticeship and training schemes are a valuable way for us to recruit and retain highly-skilled tradespeople.

“Our apprentices are a major part of our workforce and they remain with us after they’ve completed their training, as evidenced by Oliver. We also find they are the best advocates for the scheme and so we were delighted when Sian joined us last year after watching her brother’s progression.” Here at William Davis, we have been taking on apprentices since 1946. Over that time, we’ve trained around 500 people, with approximately 90% staying to work for us after completing their training.

We invest heavily in our staff and have a predominantly directly employed workforce – a factor that’s helped us win a string of top awards in recognition of the quality of its our apprenticeship and training schemes.