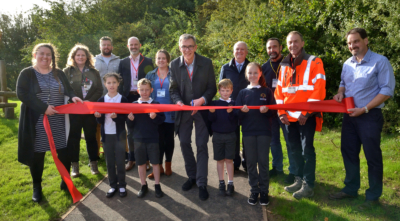 A Loughborough primary school has benefited from a donation of over 200 tonnes of quarry stone from local housebuilder William Davis Homes to help build an all-weather activity track, which will enable pupils to play and exercise come rain or shine.

The five-star award-winning house builder gave Outwoods Edge Primary School, in Redwood Road, the stone to complete the track, which is also available to members of the community.

The school caters for dozens of children, aged between four and 11-years-old, living on the housebuilder’s adjacent development, Grange Park.

The track, which runs around the perimeter of the school’s playing field and cost in the region of £34k, links hexagons of artificial grass which represent the school’s four houses and are colour-coded to match.

Mr Higgins said: “We were really pleased be able to help Outwoods Edge Primary school with this project, as it caters for so many families living in the homes we built at Grange Park.

“As a company we pride ourselves on building thriving communities and it’s a delight to see so many smiling faces at the official launch today. It’s clear both pupils at the school and the community groups who share the facility will benefit from this activity track for many years.”

The school received a donation of £14,000 from Sport England towards the activity track, as well as a cheque for £4,000 from Tesco. Further donations took the form of building material which have been received from local companies. The remainder came from fundraising by parents, pupils and staff.

One child from each class at the school was chosen to perform the first official lap of the playing field and a number of trees were also planted during the opening ceremony.

The school’s site manager Edward Daly said: “We are extremely grateful to William Davis Homes for its generous donation.

“The track has been a complete success. It’s not only used at breaktime and in PE lessons, but we’ve had classes using the corner areas as activity zones for outside learning lessons. The diversity of the track and activity zones has encouraged children to engage in a broader selection of physical activities.

“There is something about the track that makes children want to run – it is certainly increasing activity levels and it’s helping keep the rest of the school free from muddy shoes too.”

Recipes for a sizzling BBQ