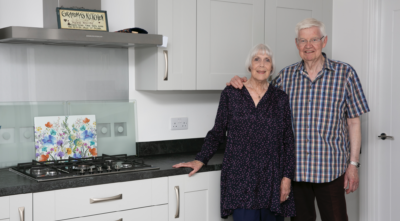 RETIRED COUPLE, MARGARET AND DAVID FINLEY AND THEIR RESCUE DOG POPPY, WERE THE FIRST PEOPLE TO MOVE INTO THE LACE FIELDS DEVELOPMENT IN RUDDINGTON.

After 40 years in Wollaton, Nottingham, the couple moved to be closer their daughter in West Bridgford.

Margaret said: “We decided to move after David spent some time in hospital. Our daughter stepped in to help with transport to and from the hospital but it was hard for her travelling across the city every time he needed to attend an appointment. Living closer to her made more sense in case we needed her help again.”

The couple liked William Davis Homes’ Prince’s Place development at Radcliffe-on-Trent and also Lace Fields at Ruddington and initially dismissed the Lace Fields development as they thought it was too far from the village centre.

They felt the William Davis Homes houses were well-built and the development was in a better position, as was the house itself. It was important to them that they were at the edge of a development rather than in the centre. The design and layout of the Lace Fields development offered that option.

Margaret says: “We drove past the Lace Fields development frequently and visited a few more times. We realised the walk to the village centre wasn’t as far as we first thought and not that much different from the distance between our house in Wollaton and the local shops.

“The location is also ideal for Rushcliffe Country Park and we now walk Poppy there every day.”

Margaret said: “We immediately put our house up for sale and it sold within a fortnight, so we got straight on the phone to SallyAnn in the sales office to see what was available on the site".

As there were no showhomes open on the site when they initally reserved, they travelled to view the Seaton at Cawston Rise in Rugby and the Severn at Skylarks in Chesterfield. The Seaton won them over as they were looking for a large lounge and separate dining room. This room was destined to become a ‘snug’.

Margaret said: “From the day we moved in it felt like home. Although we don’t really need four bedrooms, they allowed us to get the amount of living space we wanted.”

As well as the ‘snug’ the couple have adapted the office at the front of the house for Margaret to use for her many crafts and hobbies. A talented botanical artist whose work is displayed around the home, she has positioned her desk in the front bay window to gain maximum light as she works.

The couple were full of praise for SallyAnn in the sales team who was their first point of contact at the development. Margaret adds: “She was really helpful and made any changes we asked for before we moved in – for example replacing the grass at the side of the house with gravel.”

As the couple moved onto the development when construction was still going on around them, they have had plenty of opportunity to watch the the site team at work. They have been impressed by the management and cleanliness of the site.

“As we were the first to move in we are essentially living on the edge of a building site. The site is cleared and tidied every evening. Everything is well-secured and this was demonstrated in the winter storms when nothing at all came loose. And at night a security van goes round to check the site is secure.”

The couple and Poppy are now settled into their new home and enjoying its promixity to the Country Park as well as their family.

5 family activities you can enjoy at home this summer

Part exchange and join the growing community at Houlton