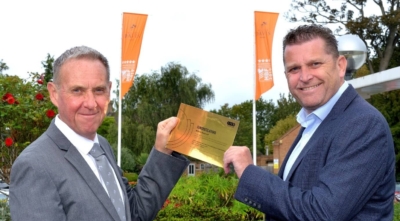 WE HAVE BEEN NAMED A FINALIST IN THIS YEAR’S CONSTRUCTION INDUSTRY TRAINING BOARD (CITB) APPRENTICE AWARDS!

Named as a finalist in the Large Employer of the Year category, this is particularly significant as the CITB awards are nationally acknowledged as one of the most valued and valid industry-based awards, recognising commitment to the development of young people and the organisations which place apprenticeships at the very heart of the business.

Jon Burton, area manager CITB, hand delivered the Golden Ticket to Gary Long, William Davis Homes apprentice and M&E manager, to enable representatives of the company to attend the Awards Ceremony on 7th November in London. The awards are being hosted by broadcaster and entrepreneur, Sarah Beeny, who is one of the most highly regarded voices in the property industry.

Gary said: “The whole team at William Davis Homes is absolutely delighted that our long-running apprenticeship scheme has been acknowledged in this way. We’ve recently completed our apprentice intake for this year and have welcomed nine young people into the business to start their careers in construction. They will be joining the other 33 apprentices already working alongside our tradespeople and mentors, giving us a grand total of 42 apprentices.”

The awards event is also being flagged on social media channels, as last year over 200,000 interactions on Twitter alone created a real buzz. We're looking forward to the awards in November!

Tips to spruce up your garden this summer