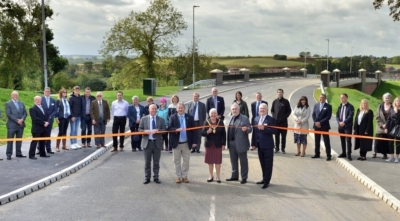 THE OFFICIAL OPENING OF ONE OF MARKET HARBOROUGH’S NEWEST AND MOST SIGNIFICANT LANDMARKS TOOK PLACE RECENTLY.

Those involved in creating a new road and bridge over the Grand Union Canal from the main A6 south of the town through to Lubenham Hill on the west, gathered to name the road Peter Callis Way and declare the bridge officially open.

A major civil engineering project, the new road and bridge infrastructure represents investment in the region of £15m and forms the gateway to Wellington Place, where the consortium of William Davis Homes and Taylor Wimpey are creating new housing, a country park, primary school, improvements to transport links and further community facilities for local people.

Guy Higgins, managing director of William Davis Homes opened the official ceremony by welcoming Chairman of Harborough District Council, Cllr Barbara Johnson, her consort David Johnson and representatives of the council, together with Cllr Peter Callis’s widow, Celia Callis, their two sons, Ian and Kevin along with other family members. Representatives from Leicestershire County Council and Breheny Civil Engineering, the company which built the bridge were also in attendance.

Hugely popular for working tirelessly on behalf of his constituents and recognised as a true ‘community councillor’ Peter Callis was Chairman of Harborough District Council twice during his career and also a member of Leicestershire County Council.

Guy Higgins said: “It’s a great pleasure to see so many here today, marking not only this significant development which represents a new and exciting phase for the town but honouring Pete Callis, who dedicated his life to the benefit of residents of the whole area.”

Chairman of Harborough District Council, Cllr Barbara Johnson, who was invited to open the bridge said: “During World War II Wellington Bombers based here roared overhead on training exercises. Now the area is coming to life again as a fledgling new community and this bridge links the existing community with that new community.

“My wish today is that future residents here get to know and enjoy our beautiful district and experience the many aspects of a very special community who will, I am sure, reach out to support and welcome newcomers. It’s a fitting tribute that, ‘as a man of the people’ Peter Callis Way is now officially named and open.”

Tips to spruce up your garden this summer